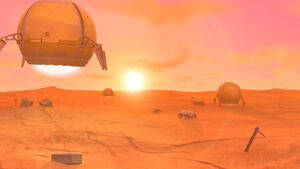 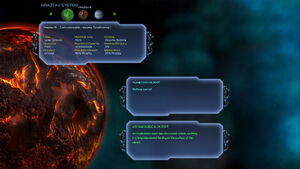 The planet view gives you pertinent information about the selected planet and if colonized access to colony development and production (build) queues.

In this view, you are provided with an information panel about the type and generic conditions of the planet. This information allows you to assess whether it’s a good planet to colonize. Some information may require you to survey the planet to find out.

Additional information about the planet is available through surveys which you can order a task force to do from the Galaxy Map. These reports can be video, planetary, mineral, biological or archaeological.

This is where you make choices on the development of your colonies. Your first and most important colony is your Homeworld with a vast population as a resource.

The screen is divided into several panels:

The system panel at the top-left provides you immediate information about the type of colony and its role in your empire. Other important stats such as your population, treasury and so on are displayed here. You can rename your colony if you so desire by clicking on its name. You may also switch to other planets in the same system by clicking on the planet icons at the top.

The (6) building panels provide you with the level of colony development in each category. You can build or upgrade by clicking on each provided you meet the minimum requirement in cost. Right-clicking or holding the shift key provide you more information.

The ship build queue panel allows you to manufacture ships. There are 4 queues: one for each size of ship. You may click on the ship names to change designs or right-click to view and modify the design.

The Orbitals panel lets you build non-mobile structures in orbit of the planet such as Shipyards or a Starbase.

The Defense panel lets you build ground defenses such as Barracks to house soldiers or missile launch bases.

A planet’s population is its most important resource. You must always keep an eye out for any factors that may affect it negatively such as food shortages. Fortunately colonists have a strong survival instinct and will always try to adjust to ensure their survival.

The workforce is the part of your population contributing either as farmer, worker or scientist. For humans typically this is around 33% of the total population. You should always aim to keep the workforce as high as possible to get the most out of a planet’s population.

Your workforce distribution between farmer, worker and scientist is automatic but it’s based on the planetary structures and the conditions of the planet.

Food production (when possible) always takes precedence. Enough farmers will be assigned to produce food to keep a colony self-sufficient. The rest of the workforce will be split between workers and scientists based on the level of industry and research structures. If no research and industry buildings exist, your workforce will be 100% farmers.

The Government panel is what defines the type of colony. When a planet is first colonized, it defaults to a listening post.

A listening post is a small base or installation built on a planet often designed to gather intelligence in an area of space. It is strictly a military operation and thus cannot build any civilian structures until you upgrade to an outpost government.

An outpost is a fully fledged colony with a government to handle a civilian population. All colony structures become available and population growth becomes possible.

Each empire also starts with a capital on their Homeworld.

Farming is the food production of a planet. Your population needs food to survive and grow.

Excess food is sold to traders so long as you have trader traffic on a planet. Traders will also sell you food (at a cost) if your colony cannot produce enough to feed its population.

Industrial structures serve two purposes. First they reduce build times, allowing you to build ships or other planetary structures in fewer turns. And second they produce goods that can be sold on the trade market which generates income.

Trade is a common thing in the galaxy. Once your planet becomes known, traders will start appearing and try to do business. You need trade traffic before your colony can buy and sell.

Trade structures facilitate trading between planets. The amount of traffic is shown in the trade panel. As traffic increases you get better trade rates when buying or selling.

As an added bonus if you have a trade structure, you collect docking fees (seen as trader income) from all traffic.

Races good at trading get preferential rates when buying or selling.

Entertainment structures make a planet more appealing not only to visitors but also to the local population.

As an added bonus if you have an entertainment structure, you get tourism revenue from space tourists visiting your planet.

This is where you can build ships by selecting the design type and the number to build.

The orbitals panel shows the structures you can build in space around the planet.

A starbase built in orbit of a strategically positioned planet acts as a military
base to re-supply starships. A starbase also acts as an orbital weapons platform
with an array of weapons and defensive measures.

A stargate is a powerful device in orbit of a planet that can create an artificial
wormhole tunnel to another stargate. Travel time between two stargates is almost
instantaneous. Stargates must be discovered before they can be built.

The defense panel shows the defense structures you can build on the planet.


A planet will be able to train soldiers once you build barracks. Soldiers are
your last line of defense in case of an invasion. Also a planet with
barracks can supply troop ships (in orbit) with replacement soldiers.

Missile batteries are an effective defense vs. most enemy ships
approaching a planet.

Energy defense platforms are very powerful weapons that add to the
defenses of a planet. Beam defense must be discovered before it can be
built.

Industrial production inevitably creates waste products that need to be cleaned up. By default, pollution control is enabled and your workers will automatically divert production resources to the cleanup effort. You can choose to disable pollution control per colony basis, this will increase production at the cost of environmental damage.

Each unit of production creates half a unit of waste by default. Research in advanced waste disposal can improve waste management and increase your production without causing damage to the environment.

By default, pollution cleanup is enabled. Workers are automatically diverted to the cleanup effort. Neglecting pollution can be beneficial in the short term but will have a serious impact and the clean-up cost later will be more expensive.

There is a way to automate the colony development. It is called the Governors. By default, the dropdown list is set at Build: Nothing. This is the manual mode where nothing gets done unless you do it yourself. You can choose one of the following development for your colony:

They are pretty much self descriptive.

You can also specify a general setting for all governors. This is accomplished by clicking the blue gear icon over the dropdown list. You can choose what defensive buildings that you want built, what orbitals, the pollution control, the terraforming and the all important Treasury allocation.

My suggestion would be to always enable the pollution control and terraforming unless you set the terraforming by hand, in which case disable this or the governor may turn terraforming off sometimes in your colonies. I think he checks if you end a turn with not enough money then he turns off the terraforming even if you have plenty of money coming in next turn. Also, enable the starbase and barracks. Those two are necessary everywhere and the barracks cost so little in building and maintenance that you're better off having them than not. Also helps if you get a surprise invasion! Myself i don't build missile and beam base everywhere because they are expensive and are needed mainly on the frontier planets. I prefer to build them manually for this reason. For the stargate, you can build them everywhere if you want but they happen so late in the game that they are not a requisite to have and most of your colonies will be topped up at that point. I generally build a few of them on my main industrial worlds and on the frontier to get to the battle faster. Not much used in defense at this point since you dominate so much.

(Dev Raf on steam forums wrote this:)
The governor allocation works like this: 50% (default setting) will spend at maximum half your treasury in total on planets where the governor is turned on (one of the choices in the drop down is selected eg: Build Research World). If the governor can't build a building it will wait until there is enough. The colonies are sorted by population value, so higher population planets get to use the treasury money first. Note that tributes/monetary aids etc can reduce the treasury before the governor can start using it during turns.
(End Dev Raf ranting ;-)

Also something to note with governors at the moment, they seem to use the money LEFT in your global treasury at the end of your turn. They don't use the money coming in next turn and they don't base their building decisions on it. So if you end all your turns with no money left in your treasury, the governors will do nothing. I still have to confirm with a dev that this is the actual way they works, but it is what i noticed in the game (As of V1.0.2.126).