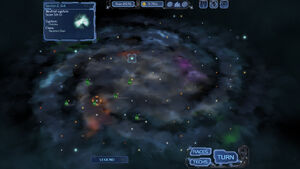 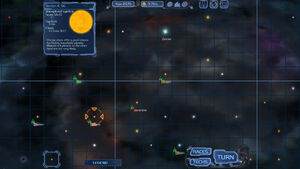 Ships can move around anywhere inside the galaxy with no strict limits although ships can run out of supplies and will slow movement until replenished automatically.

You can explore each system, survey planets and also conduct archaeological digs. If a planet is suitable you may colonize it.

To expand you will need outposts and colonies. Outposts can extend the range of your fleets without requiring the investment of a colony. You can only colonize planets if they have a suitable environment for your people.

Moving task forces: To order a move, select a task force on the task force panel and then click the destination sub-sector on the map. A line will be plotted indicating the movement order has been set.

Surveying a system: To do a thorough examination of a system, you can order a task force to survey a system or planet. Click a task force on the task force panel and then hover over the orders button and click survey. Then on the sector panel, select a planet or the star to survey all planets.

Digging for discoveries: You can order a dig if you think a planet may contain hidden artifacts. Digs are usually done after a survey reveals something hidden on the planet or if you have other information. To order a dig click, a task force on the task force panel, select it’s order and then pick a planet in the sector panel.